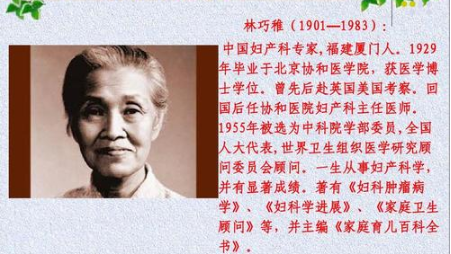 Lin Qiaozhi (December 23, 1901 - April 22, 1983), medical scientist. She is in the fetal palace breathing, female pelvic disease, gynecological tumors, neonatal hemolytic disease and other aspects of the study made a contribution to China's obstetrics and gynecology is a major pioneer, one of the founders.

She is the first Chinese maternity and obstetrics director of the Beijing Union Medical College Hospital and the first female academy of the Chinese Academy of Sciences (academician), although the life did not get married, but personally delivered more than 50,000 babies, was known as "million baby mother" , "Life angel", "Chinese medicine", and Liang Yiwen is collectively known as "Nan Liang North Forest".

In 1929, graduated from the Union Medical University and received a doctorate in medicine, was appointed to the Union Hospital Obstetrics and Gynecology doctor, for the hospital's first graduate of the Chinese female doctor, is the first "Wenhai" scholarship only winner.

As a result of outstanding work in the Concord Hospital, she was promoted to a resident in advance, and in 1932, was sent to the British London Obstetrics and Gynecology Hospital and Manchester Medical School. In 1933, medical study was conducted in Vienna, Austria. In 1939, to the University of Chicago School of Medicine as a graduate student.

During his study abroad, he visited Cambridge University, Newham University, and practiced for two months at the Maryland Medical College's Obstetrics and Gynecology. She spent almost all the time out of the laboratory work, to the rich information of the library to learn, at noon to come up with a sandwich bread to eat. In addition, a wide range of visits to various hospitals and research institutes in London, such as the Chalers Gynecological Hospital, the London Maternal and Child Health Hospital, the London Maternal and Child Hospital. Visited the Radium Radiation Center Center Station will be advanced science and technology applied to the medical field of equipment, which inspired her to provide research ideas that laid the foundation for her research on the treatment of choriocarcinoma. Finally, she went to the Royal College of Medicine, Department of Obstetrics and Gynecology, in his teacher's laboratory of the laboratory for children with intrauterine respiratory research, her research results were recommended to Birmingham City, the British Obstetrics and Gynecology Conference Exchange, be praised.

In 1940, Lin Qiaozhi was hired by the United States as a member of the "Natural Science Honor Committee". Returned home the same year, and soon promoted to director of obstetrics and gynecology, became the first Chinese nationality female director.

At the end of 1941, the Peking Union Medical College Hospital was occupied by the Japanese because of the Pacific War, and she was expelled from the hospital with all the medical staff. Because of the war, her medical science research ended for almost 10 years.

In 1942, in Beijing Dongtangzi alley to open a private clinic, in order to reduce the burden on patients, she took the initiative to reduce the registration fees, medical expenses for poor patients and other measures. Soon, and served as the hospital and the hospital (formerly the Central Hospital, now Peking University People's Hospital) Obstetrics and Gynecology director.

In 1946, he was appointed as the director of Obstetrics and Gynecology Department of Peking University Medical College. In the same year, medical educator Li Zongen was ordered to resume the Concord Hospital, repeatedly invited her to return to the Concord, she repeatedly considered, resigned from the two director positions, stopped the clinic opened in 1948 to return to Concord Hospital, while her students together Back to the Union Hospital Obstetrics and Gynecology, and work here until death.

The Cultural Revolution began, with the Concord "reunification of the state", a vigorous "transformation" campaign started. Lin Qiaozhi was classified as "the focus of the transformation of the object", "reactionary academic authority", was assigned to the ward to do care workers, cleaning potty, down spittoon ... ... these work she did meticulously, after all, she has not left Concord, she said this Is lucky yet. "Cultural Revolution" after the end of Lin Qiaozhi nearly 80 years old, the body gradually weakened.

From 1972 to 1974, he visited the United States, Canada, Switzerland, France and other countries for academic exchanges.

In 1973, he was appointed consultant of the World Health Organization Medical Research Advisory Committee for a term of five years to 1977.

In December 1978, Lin Qiaozhi and Chu Tu Nan led the Chinese people's friendly delegation to visit the four countries in Western Europe, in the United Kingdom due to ischemic cerebrovascular disease returned to China. In the capital hospital, after examination, she was diagnosed with hypertensive arteriosclerosis, cerebral thrombosis, heart disease. During the illness, she began to write books on gynecological tumors in a wheelchair, bed, until four years later, 500,000 words monograph "gynecologic oncology" completed.

December 2, 1980, exacerbations were sent to the hospital. Although friends were discouraged, but she also insisted on work. At this point, she is not a resident, but she asked doctors and nurses on duty, as long as the patient problems, even the middle of the night have to immediately inform her. Even in the day before his death was also born with six babies.

In the spring of 1983, Lin Qiaozhi worsened and fell into a coma, and she always intermittently shouted: "Come fast! Take the pliers and make the tongs ..." Then the nurse caught a thing and stroked her in her hand. In the same year on April 22, Lin Qiaozhi died in the Union Hospital. Will, she will personal life savings of 30,000 yuan donated to the hospital nursery, ashes scattered in the hometown of Gulangyu sea.